So on Monday,11 March 2013, I left home for my trip to Mabibi. The book in time at the campsite was 12h00 and with my calculations I only have to leave home at around 10am to get there before 1pm and have time to setup camp and check the surf out in prep for the next day’s fishing.
The tarred road to the Coastal Forest Reserve turn off was a pleasure to drive except for the cattle, kids and goats in the road! Oh and I almost forgot the speed humps! After about 15km of gravel road towards Mabibi I decided it was time for a stop and maybe deflate my tires a bit in preparation for the sand tracks that lay ahead.
I followed the signs as suggested by the camp for a few more kilometres and noticed some construction trucks have made their way on the same road. It’s hard to miss the deep trenches they create with their rear wheel drive side by side tires… I thought little of it at that stage. But after the road turned into a single track I realised that the combination of driving a soft roader with 4×4 and the construction trucks that drive the road, I might not get a lot further… not 2min later and I was stuck on my chassis with only myself and a shovel to help out.
I was still happily digging my way out when I noticed 4 human figures appear in the distance, coming my way. What do I do? I had a full can of pepper spray in the car and loaded that in my pocket hoping it will help ease my concerns. It didn’t help much.
To my surprise it was 3 women and a younger male coming to help me dig the vehicle out, still a bit sceptical though.  I kept on digging while they told me the construction trucks have made the road ahead even worse.
Then my luck turned, a driver from the fancy lodge at Mabibi came from ahead on his way to pick up some tourists. Has to be as most South Africans wouldn’t pay R3k per person for one night’s stay anywhere 🙂 After a quick recovery the driver said the younger gent that helped me dig, Simphiwe, can show me another route that is not trashed by trucks.
The other road was a breeze, with the odd spot a bit of momentum was needed to make it through. Finally at 2pm I was safely in Camp and busy setting up!
DAY 1
After a rough night alone in the bush with not a person in site I set out to test the bay at Mabibi for the 2nd time. The day of my arrival saw the swell too big in combination with the spring tide to keep my fly in the water between waves.
I walked down to the beach. Not a person in site. And there I see a bait ball trapped in the corner of the bay with baitfish flying everywhere! Armed with my trusty 9wt I made my first cast slightly next to the trapped baitfish and noticed as a swell moved in  that there is a school of around 20-30 Small Kingies waiting patiently for their gap. Your hart can’t help but race when you see the most perfect sequence of events unfold right in front of your eyes. You know it’s on… 2nd cast… ON!
After a few more casts with the 9er and a nice Wave Garrick also to show I decided its time to test my new 12er. After about 40min a missed strike (from a greedy Big Eye) plus a sore arm later I decided it was time for some rest on the beach.
The problem was the tide was going out and draining the bay so quickly that I never got a chance to track the school of kingies down again plus the sun was now sitting well above me. Spring tide you bugger! With all this I decided that it’s best to go make some breakfast at camp and wait the afternoon high.
Unfortunately I realised that I will need to spend another night by myself in the bush, not as pleasant as it may seem even with awesome fishing to be had.
I phoned up another campsite at Kosi Bay. Got a spot for the rest of the week and made a move to there with the hopes that I would feel more comfortable surrounded by a bit more people.
Afternoon session spent on the road 🙁
DAY 2
Hit the road to the mouth at 6am, Full spring tide with the high on 4:50. Sounds great, till you get down the dune and next to the water. The road was flooded, saltwater. Made a crossing through the first hole and to my surprise the rest of the road was also flooded for another 200m. I decided to stay on a little 10m stretch of dry road till the tide receded. Eventually got a line wet at 8:30am. I managed a small 15cm Blue Fin Kingfish and decided that I am heading out to get me car washed before the tide makes its way back up the channels.
Afternoon session spent in Manguzi at the car wash and waiting for a mate to join me at camp 🙁 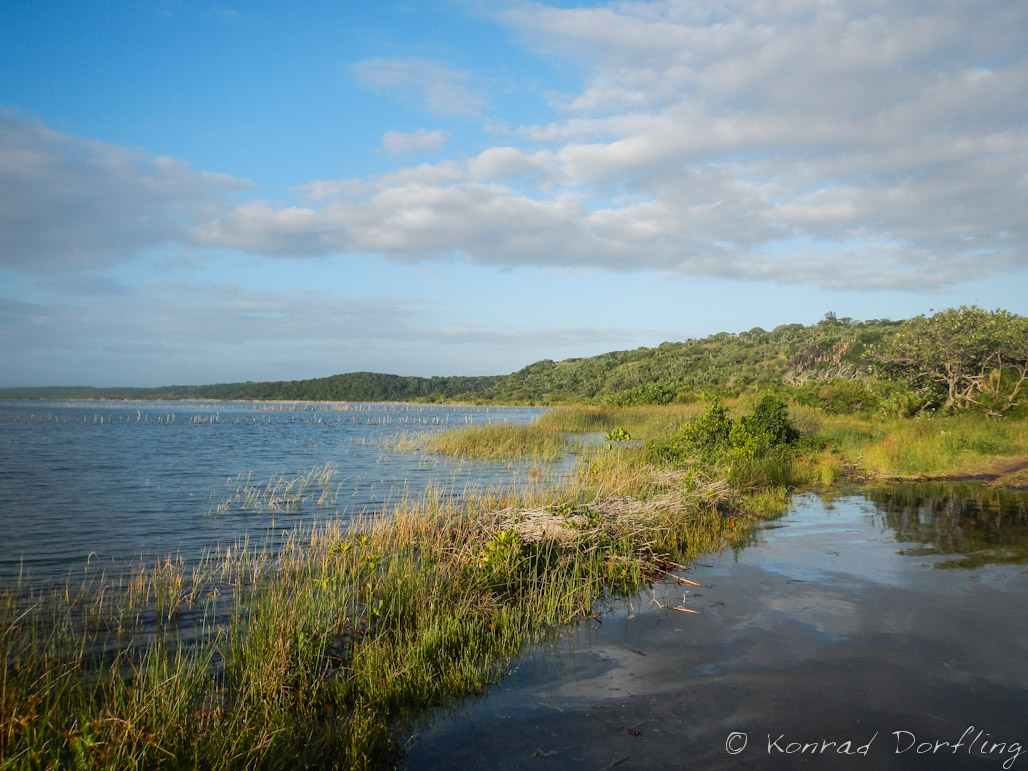 DAY 3
We hit the channels and got into some small Kingie action and later moved over to the Northen side of the mouth for some surf action. The surf is where you need to be at Kosi. All we managed was to get frustrated by a 1m Gar Fish and a few Pickhandle Cudas that after numerous takes and hookups seemed to have figured how to frustrate a fly fisher to the point that swimming after them seemed to be the only resort.
DAY 4
Channels, Kingies. My buddy left midday to head to Potch for the weekend. Then another buddy came down for the weekend session. Again the afternoon in camp waiting.
DAY 5
After a long discussion around the use of one’s energy and saving it for the best possible fishing condition and time, I again saw myself fishing the channel from before midday. Again landing small Kingies, oh what fun it was. We heading over to the surf at full low and fished the gully just North of the mouth waiting for the tide to push. Again Mr. 1m Garfish was about with his mates the Cudas. this kept us busy for a few hours..
Eventually at around 3:30 I had a nice pull and a line ripping out my stripping basket. A nice Springer from the surf, I have caught a few Springer in St Lucia Estuary but this was my first in the surf. I must say they are a good fight in the waves!After some new hope we carried on with our plan to fish till dark.
I found myself on the dune watching the waves when I noticed a big gray object slowly moving past my buddy, oblivious to what just moved right past him I made a run for my 12wt. Black Tip Shark of around 40kg! No wire tippet I decided that I will go for it anyway, 100m dash, stripping line as fast as I can. Stop, where are you? 5m to my left moving right, cast and strip. He didn’t see it! run another 30m and the fly lands with time to spare, I start stripping with the fly almost touching his nose, he turns and I see his mouth open… time stands still… miss…
We saw a few more sharks bolting into the shore break only to run away as the wave recedes, but I never go another chase or another fish for that matter.
after a 8 hour fishing session we called it quits and heading back to camp.
Next time I’m staying at Mabibi the whole week, just not alone again.

My name is Konrad Dorfling, born and raised South African. I have been flyfishing since my days in primary school.

I have created this blog as a record of my fishing adventures and progress to look back on in the future and as the years add on. I hope that you join me on my journey and find some insight along the way.